No money? No love life? No career direction? No purpose? Nothing to show for yourself but a useless degree?

When the beloved furry monsters we know from The Muppets and Sesame Street wove these problems into the fantastic opening of musical comedy Avenue Q, in songs entitled “What can you do with a BA in English?” and “It sucks to be Me!” my first thought of the entire show was “who the f**k has plagiarised my life and turned it into a musical”?

Judging by the unanimous roars of knowing laughter bouncing off the walls at Liverpool’s Empire last night, I wasn’t the only one thinking that. Avenue Q is sharp and witty, but most of all it’s relevant.

Turns out we’ve all lived there at some point in our lives.

Created by Jeff Marx and Bobby Lopez, the narrative was drawn from their own adult hang-ups and experiences. The show’s comic premise is that cute, furry puppets living in a dingy, down-on-your-luck street in an outer borough of New York, get up to all kinds of adult debauchery whilst trying not to worry about where their (slightly) shitty lives are headed. 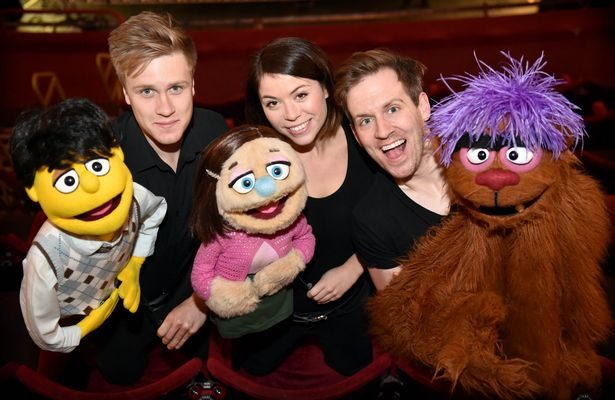 That the puppets came to life with such ease is testimony to the talent of the solid cast and crew whose performances really can’t be flawed.

For anyone who’s ever felt uninitiated and inhibited, financially challenged and underwhelmed in their career, chances on you were living on Avenue Q- a place to face blunt truths, find a purpose, learn life lessons  & have fun along the way.

So if you want to feel less shit about your life, discover what people really do on the Internet and enjoy a generous dose of the sadly dying art of political incorrectness, you have to see this play! It’s an irresistibly charming musical like no other.