Slimming World: 50 Things You Only Know If You Follow It | Scouse Bird Problems 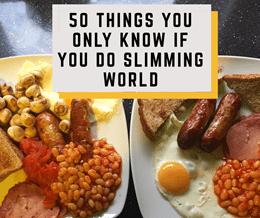 6. There’s always someone in class called Karen who goes on 42 cruises a year. It’s a Slimming World law.

7. You think the X Factor have good sob stories? Wait until you try and see someone justify putting on 2lbs at a Slimming World class.

31. You can’t figure out why chocolate bars are decreasing in size but the syn values are staying the same. Can we get this checked Slimming World head office?

37. There’s deffo someone who uses the Slimming World class as a free form of therapy. I’m so sorry that your husband is an alcoholic, that’s really sad but I’ve got a chilli in the slow cooker at home and I haven’t eaten all day Sue.

42. You’re the only fucker who’s ever heard of Quark.

43. Which is weird, because now you use Quark for everything. How do people live without Quark?

44. You’ll swear blind that Frylight is the devil and ruins all your pans rather than admit you just buy cheap pans.

45. You’ve made the mistake of stockpiling Fibre One bars because the Asda actually had them in stock for fucking once and ended up ‘accidentally’ spending an extra 80 syns on them because there was a huge pile of them looking at you every time you went in the kitchen.

46. You know someone who’s lost a pound and started posting inpirational weight loss statuses and talking about their ‘journey’.

47. They’re probably the same person who when they lost 2lb started posting before and after pictures of themselves in grey, baggy underwear asking strangers if they could see a difference yet. Sorry Sharon, not really, but well done for not eating your body weight in cheese this week, you go girl.

48. You’re following the porky lights scandal with more interest than Brexit, the Trump election and the latest Eastenders, Corrie and TOWIE storylines combined.

49. Still gonna count them as half a syn though. 👀

50.  You know it’s one of the easiest diets you’ve ever done, it genuinely teaches you good eating habits and to be honest, after seeing the weight fall off with minimal effort, you’re actually just a bit pissed off at yourself that you never joined ages ago.

If you liked this, try 8 things that make doing Slimming World dead easy.