Scouse Bird Problems – USA: Eloping to New York – Why I did it & how

So we eloped, in secret (even my mum didn’t know), and got married in New York last week and it was boss. I think even including rings, outfits, hotels & flights we easily spent less than £6000* and we had a lovely romantic time that we’ll never forget.

*If you take out the engagement rings and trip to NYC (we were going anyway) etc then you’re looking at less than £2000. Weddings do not have to cost the earth.

In New York you need to go to the Office Of The City Clerk (on Worth Street) and NOT City Hall (as we thought) to get a marriage licence. You’ll need to wait a full 24hrs between getting the licence and actually getting married so bear that in mind when setting the date. The offices are closed on Saturdays and Sundays. You can speed up the process by applying online before you go and you’ll need to take with you ID and proof of any previous divorce (if applicable). It costs $35 (about £26) for the licence and $25 (about £19) for the actual ceremony and certificate. Marriages abroad are legal in the UK as long as you’ve complied with all local laws.

You don’t even need to get a photographer if you don’t want to, you’ll be surprised what you can achieve with a selfie stick and the backdrop of NYC. That being said, we did hire one. I looked into it before we went and most photographers want to be hired for all day weddings and their rates tend to be between $2000-$4000. No. Just no. I just wanted someone for a couple of hours tops so after trawling message boards for a few hours I found Jasmine Photos who charge $600 (£450) for 2hrs and $150 (£113) per hour thereafter. Better. You don’t pay until they come to your hotel the next day with the photos. There are photographers hanging around outside the city clerks office but I’m not sure I’d trust my big day to them without seeing a body of work first – one lady handed me a professional looking business card but when I checked all her social media links for her work I found they either didn’t exist or had no uploads. Dodgy as fuck IMO.

There’s surprisingly not that many florists around downtown NYC and I was starting to panic. No worries though, inside the Clerks Office they have a florist with pre-set arrangements to pick from but there’s a guy with a flower stand right outside the entrance who does them for $10 cheaper.

For your actual wedding photos there’s tons of different places you can go around the city (come on, it’s New York, every street corner is a photo opp) but beware of the time it takes to get to each destination. We were going to have pictures taken on Brooklyn bridge and Top Of The Rock but I didn’t fancy hiking all the way to the bridge (taxis can’t stop there so it was a walking in heels and dress job) and it was freezing. It took us a good half an hour to get from the City Clerks Office to the Rockefeller building in traffic but it was well worth it – the views are spectacular. Sidenote: If you’re in NYC NOT for a wedding and have the choice between going up the Empire State or The Rock, choose the Rock. The views are much much better.

The photographer will happily be your witness or you can grab a stranger. If you’re bringing your own witnesses then they’ll need ID. You only need one witness.

There’s only 2 types of cake you can have in a legit New York wedding and that’s cheesecake or cupcakes. We got a GORGEOUS red velvet cupcake from Juniors near Times Square (their cheesecake is also to die for btw) and it looked so fab in the photos.

It’s New York so the list of cuisines you can have is endless. Whether you want to do dinner at The Langham or book a romantic meal at The View (a rotating restaurant at the top of The Marriott Times Sq) or even do a Hillary Swank after the Oscars and go for a burger, the choice is yours. There’s a fab little restaurant under Rockefeller overlooking the ice rink, that was my personal choice. The toilets have great lighting too in case you wanna do your own selfie shoot.

We sorted these before we went. Being 6 months pregnant I had to be careful with my choice of dress – I would trust no other than the wizard that is Mark Melia. He didn’t disappoint – you could barely even see my bump at all and the dress was just gorgeous and looked perfect against the backdrop of the Manhattan skyline. Check out the Mark Melia bridal range – yep he did design Michelle Keegan’s dress & all her bridesmaids 👌 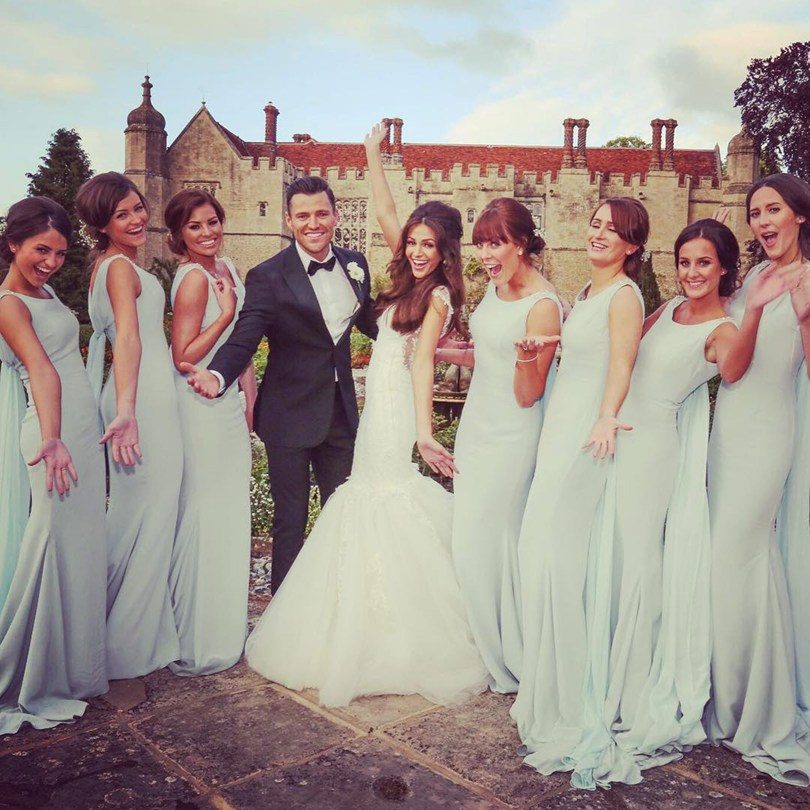 I was proposed to with a charm for my charm bracelet (my husband knows me well enough to know I’d rather choose my own ring). With a penchant for ‘something a bit different’ I chose an emerald cut sapphire with diamonds either side and a baguette band, then a baguette half eternity wedding ring to match. The designers in Wongs are just amazing, they were so good with getting the design just perfect, and, knowing that it wouldn’t be ready in time (you can’t rush perfection) they even made me a ‘lookalike’ engagement ring so I would have something to wear on the day, which also handily doubled up as my something blue*. I can’t recommend them enough.

*getting the something borrowed was the hardest part because of doing it in secret. I managed to blag a pair of earrings off my mum and some shoes off my mate.

Try and stick around midtown so you’re in the thick of things. We stayed in the Hampton Inn in 35th street, it’s not expensive, the rooms are comfy and there’s as much free coffee in the lobby as you can drink which saved a fortune on morning Starbucks. Two doors down is The Marriott and they have a fab rooftop bar called Monarch which has fab views of the Empire State building. You’ll pay through the nose for drinks though…

Don’t go American Airlines – there’s more leg room on a Ryanair flight to Dublin. It was not a comfortable flight, particularly being 6 months pregnant with a bad back. We’ve flown Aer Lingus long haul to Chicago and they were brilliant; on the day we flew out to New York they announced they are now doing flights from Liverpool John Lennon to JFK from £199. Is right.

So there you go, that’s how we got married and spent fuck all and why. Remember a wedding is about making a commitment to the person you love, not about everyone else. It’s about you and him (or her) and how much you love each other, not about outdoing your mate who had an ice sculpture and a photobooth at their wedding. The rings are a symbol of everlasting love and not a status symbol of wealth. Either way, the absolute most important thing is making sure you’re marrying the right person not about scrimping and saving for years to have a status wedding. If you love someone just go and do it,  I wholeheartedly recommend eloping, it was brilliant, cheap and unforgettable 👌