Scouse Bird Problems – Interview: The one and only Jamie Carragher

When it comes to Scousers, Jamie Carragher can’t ever be far from the mind when conjuring up an image of the stereotypical Liverpool lad. 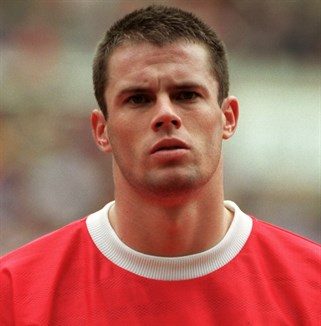 Always was a fitty

The Bootle born defender spent 17 years with LFC, their second-longest ever serving player, and retired in 2013 as a one club man. He’s now a media darling; with newspaper columns and a pundit job on Sky Sports alongside fellow ex footballer (but still current rodent lookalike) Gary Neville.

When we clocked that he followed Scouse Bird Problems on Twitter apparently on the recommendation of his own Scouse bird (and he only follows 143 accounts by the way – nail emoji, ‘too fab to care’ hair flicking girl emoji) we cheekily DMed him and asked for an interview. As you can probably guess, given that you’ve clicked a link about a chat with Jamie Carragher, he agreed to it as he’s a total babe.

Given that Carragher has an accent so strong it requires subtitles now and again (“If you think mine is strong, yer wanna hear me dad!”) we were little nervous about having a chat over the phone but even with a dodgy connection (EE, you really are useless) no translator was required.

(NB: I’ve omitted quite a lot of ‘erms’ that came from the pair of us over the course of the call.)

Hi Jamie. First things first, we’ve got to ask – just how devastated would you have been had LFC actually won the league last season, just a year after you’d retired? Be honest.

Oh yeah, I would have been absolutely gutted to miss out having been there so long.

(Laughter) No, I would have been 50/50; the other part of me would have been made up for the supporters, my family and friends and my son – he was absolutely heartbroken. There was certainly a bit of me professionally that was thinking “What could have been?” – No doubt about it that there were parts of me that felt both ways.

Your first year after leaving LFC involved watching them almost win the league – any advice for fellow one club man, Steven Gerrard for when he jets off to LA Galaxy at the end of the season?

Forget Liverpool; forget the football club and what has been – look forward. It’s brilliant what he’s achieved, he’s a better player than I ever was, but he can’t look back. I’ve only been to Melwood two or three times since I retired – I’m doing other things now. People think it’s strange that I don’t have much contact with the club but I think it’s healthy – when you’ve left, you’ve left. Stevie should let them move on and he can focus on something else – LA, or whatever he wants to do. When you finish, if you’re not involved with the club then stay away and get on with your own life.

So we’re not going to see you as an aspiring LFC manager in the near future?

Oh listen, I still love me club; I’m still passionate about it and maybe in the future if a job came up, or if the club wanted me involved, but it’s not something I think about on a daily basis. I go to the match with me dad and son but that’s as far as it goes. I’ve got other things to focus my energy on; I’m working on TV, newspaper columns and speaking with Scouse Bird Probs…

Now you’ve mentioned Scouse Bird Problems, you must have some Scouse Lad Problems for us?

Erm let me think….. Back in the day everyone used to have to wear a Lacoste tracky and Adidas Trojans, which were alright at the time, but you look back now and think ‘Fucking hell.’

The other week LFC announced a partnership with Nivea Men which comes complete with a TV advert. What do you think about these footballers and their grooming habits? Ever tempted to have a word in Phil Neville’s ear about the fact he’s still getting highlights in 2015?

Oh we had it all with Jason McAteer with the Wash & Go advert – I think Joe Hart does it now, doesn’t he? I actually think the Nivea Men advert is quite funny – Jordan Henderson is really good in it.

I mean, I’ve started using a bit of face wash since I stopped playing so I can’t say too much but players dyeing their hair, putting highlights in – Phil Neville….It’s embarrassing; not just for a footballer for any grown man. 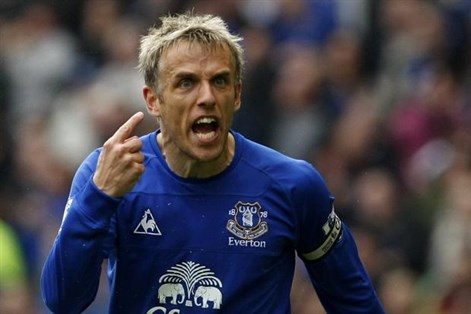 What? You want me to head the ball? I’ve just had my roots done mert, you serious?

Speaking of The Neville’s – do you actually like Gary Neville these days since you started working together?

I can’t believe I’m saying this but yeah, I do actually. He’s been a really big help to me since I’ve started out in the media; he’s been doing it longer than me so he’s been able to give me a hand and we’ve got to work as a team. We do joke together, and there will always be that Scouse/Manc rivalry, but it has changed since when we were playing for England and I maybe only spoke four or five words to him.

Not exactly roommates on England trips then. Who was the worst player you ever played alongside or against?

The worst has to be El Hadji Diouf. Actually, I quite enjoyed playing against him as you could kick him them – can’t kick your own players.

Stevie, obviously – gotta get a Scouser in.

I will argue with anyone that there is no set of women that will dress better than scouse women on a night out. No doubt about it.

(Make your bosses at the Daily Mail aware of this fact come Aintree please, Jamie)

You know what; I don’t class Liverpool as a city – it’s like a village. Everyone knows everyone, all the bars and clubs – it’s not too big. You can be anywhere in town and get a phone call from someone and they’ll only be round the corner. The sense of community, the spirit of the people, the size, the humour – there is nowhere better in the country.

Scousers are known for their colloquialisms – what are you favourite scouse words or sayings? Arlarse? Beaut?

I like boss. Actually, the word I use all the time is sound – if something’s alright it’s sound as a pound.

Any funny stories with players not understanding your accent in the dressing room?

To be honest, I think a lot of the foreign lads, when I’d speak to them, would just nod and not have a clue what I was saying – just thinking ‘Won’t say anything then he won’t lose his temper.” (Laughter)

One final question (and we’ve saved it until the end in case you get a cob on and hang up) – Are you a Red or a Blue deep down? We know you were an Evertonian growing up – is there really a hidden tattoo?

I was a big Evertonian, no doubt about it, but I’m a Red – Liverpool, deffo. I’ve been through too much with the club and made too many friends along the way.

Liverpool through and through.

Red or a Blue, you can’t argue that he really is Liverpool through and through. 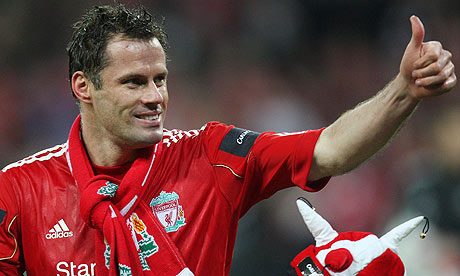 Once again HUGE thanks to Jamie for taking the time to chat to us!