Dermaroller Facials – Are They Worth It? | Scouse Bird Blogs 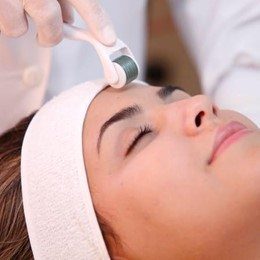 Life can be tough enough without your skin deciding to act up. Your mum may be all smug; telling you how she never really got breakouts in her day as she simply drank lots of water and always remembered to take her makeup off before bed (yawn) but it doesn’t really help you when your face resembles the before shot of a Clearasil commercial, does it?

I’ve done my time with the horrors of adult acne and, touch wood, after some antibiotics and living a miserable little life without cheese, I’ve finally won the battle against spots and blemishes. The bad news though? It leaves scarring which is almost as annoying as spots.

Keen to completely clear up my skin once and for all and live life as the solid 10 I’m meant to be, I decided it was time to try the Dermaroller facial at 53 Aesthetics based in Prado Liverpool.

With celeb fans like Cara Delevinge and Lindsay Lohan, the Dermaroller facial is the latest invention to promise you a more flawless complexion; reducing the appearance of scars, evening skin tone, boosting collagen and plumping the skin. The Dermapen is a micro-needling system that contains 12 microscopic needles. When the tips make contact with the skin, the needles work to make tiny punctures which result in the creation of healthy new collagen.

The whole process took around an hour. Starting with Jenny at 53 Aesthetics cleansing and preparing my skin with what felt like a relaxing mini facial in itself, my face was then ready for the pen. I opted for the serum that reduces acne scarring but you can choose from others which include anti ageing or a mixture of the choices. Your face is numbed prior to the Dermapen coming in contact with your skin to minimise any discomfort and you go three ‘rounds’; with a break in between each one to give your face chance to recover.

For me personally, no. It can be slightly uncomfortable at times, and weirdly you get a sensation that makes you feel like you’re about to sneeze, but I’d say the pain level is no more than what you experience having your eyebrows waxed or threaded. The idea of needles being run across your face can be a bit daunting but Jenny makes you feel relaxed and calm and puts any concerns you may have at ease.

Immediately after the procedure, my face was a little red, like I had done a workout at the gym, but there was nothing too dramatic. Within a few hours, it had completely died down so there’s no chance of resembling Sam from Sex and the City after she had her peel. Jenny advised me to keep my skin away from water and the sun for as long as possible so to get the best results from the treatment; allowing my face to keep repairing without any interference.

Massively. I feel to completely rid me of all my scarring, it may take a couple of sessions but I am quite a severe case. Within a few hours I already noticed my most problematic area on my cheeks had improved and over the next couple of days, I saw a vast difference with how much easier it was applying my makeup of a morning. Whereas I used to have to pile on the concealer and heavy foundation, I’ve been able to leave the house with just a little bit of BB cream on without scaring anyone too much.

It’s not just the appearance of scars that it has improved, my face also feels fresher, tighter and younger. And all without having to drink lots of water and take my makeup off before bed. In your face, mum.