Did you know that, at the moment, hundreds… no thousands of twenty-something women are suffering from a condition known as ‘Continual Sex and the City Box Set Syndrome’?

At any given time these women are locked in an endless cycle of watching the entire six series of Sex and City only to start all over again when they finish; so completing the great ‘Circle of SATC’.

I know, because I am one of those women.

I love Sex and the City. I love Miranda, Samantha and Charlotte. I love their characters and how they grow and evolve as the series goes on.

At this point I should probably make clear that I’m aware that Carrie Bradshaw is a fictional character and I could just stop watching the series. But instead I’ve decided to do the rational thing and have an internet-rant outlining exactly why she’s such a massive dick.

So, let’s take a look at the evidence…

When her shoes were stolen from a baby shower, (probably by one of the children)she, quite literally, registered herself at Manolo Blahnik and made a woman with three children and a newborn, buy her new $485 shoes ‘in celebration of Carrie.’

Carrie is a shitty girlfriend to Aiden. After he takes her back, forgives her lengthy affair, tolerates her friendship with the guy she cheated on him with, then invites her on a weekend away in the cabin that he pretty much built himself, (sexy btw) – she spends the entire trip complaining and generally being a massive diva… mainly because squirrels exist.

Then, she has the absolute audacity to invite the guy she cheated on him with to said cabin that he pretty much built himself (sexy) to chat and drink wine. 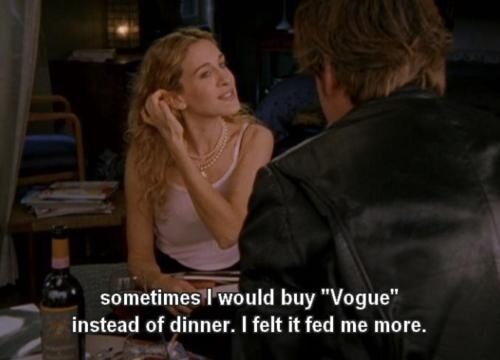 She spends a week moaning incessantly because one of Aidan’s exes gives her a bit of a snotty look. In the meantime, Miranda’s struggling to cope with being a single mum and Charlotte’s on the verge of going to court in a bid to keep her home.

None of that matter though, because someone gave Carrie a dirty look.

She does briefly come up for breath mid-moan, though, long enough to guilt Samantha into babysitting for Miranda… despite not bothering to offer to do so herself.

She throws a strop and literally stalks Natasha, the wife of the guy she had an lengthy affair with, because she won’t immediately accept her apology. 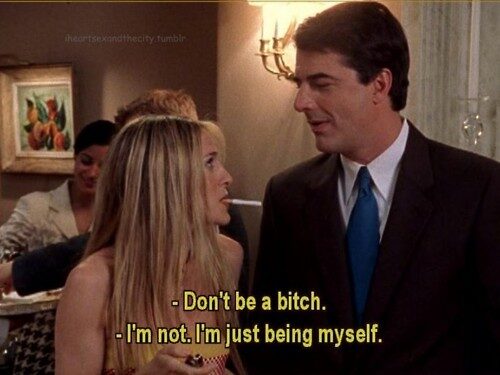 Carrie can’t help herself from throwing sly digs at Samantha both when she’s dating Maria and when she’s caught going down on that delivery guy – despite the fact that Samantha completely nonjudgmental during Carrie’s affair with Big.

Oh, and the latter is when Samantha is taking time out of her life to do free PR for Carrie’s book launch.

Remember when, as a 35-year-old woman, Carrie suddenly realises that she’s spent $40,000 on shoes despite having absolutely no savings whatsoever? Well, instead of considering selling some of her shit, or even looking for a second job, she epically loses her shit because Charlotte doesn’t immediately offer to pay the deposit on her flat for her.

Then, when Charlotte finally gets back together with Harry after months of heartache – and get’s engaged – Carrie  sticks her Burger-break-up-post-it over Charlotte’s ring, quickly putting an end to any excitement that might have resulted in the spotlight temporarily shifting away from her. Because nobody gets to be happy if Carrie isn’t happy. 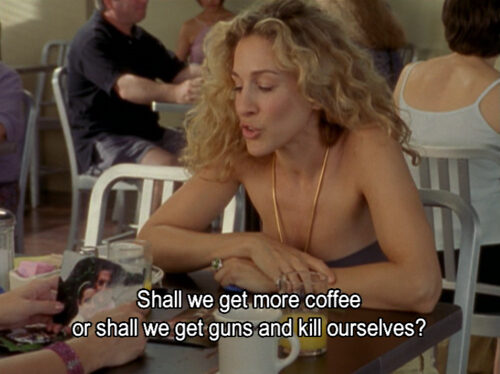 As well as the time that Carrie sent her boyfriend to peel a naked Miranda off the bathroom floor, rather than go herself – then proceeded to moan about her ever-turbulent love life the next day before even asking about the extent of her injuries – Miranda bears the brunt of Carrie’s shitty friendship.

First of all, when Miranda accidentally gets pregnant by her ex boyfriend and very close friend, and (naturally) struggles to decide whether or not to have an abortion, Carrie makes sure that the conversation never moves away from her by going on and on about an abortion she had 13 years before after sleeping with a random waiter when she was drunk.

Secondly, when Steve cheats on Miranda leaving her heartbroken, looking for a new home and worrying about the custody issues surrounding her 5-year-old son, Carrie doesn’t rally around the friend that has been with her through everything…  because she has a wedding to plan!

BUT, when Carrie gets left at the alter by a man who she’s known to be a liability for ten years, her friends are expected to get her (already sold) home back, pick up all her stuff and get her out of her honeymoon.

Side note: When Samantha tries to get her out of her honeymoon by suggesting there had been a death, she replies ‘wasn’t there?’ No, Carrie. No there wasn’t.

And then, when they can’t cancel the honeymoon, they drop everything – their jobs, children and lives – to fly to Mexico with her and feed her for the first three days. 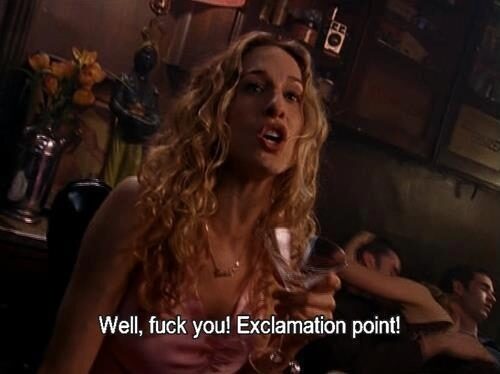 – Being able to build your own cabin is pretty sexy.

– It’s probably time I laid off the boxset for a while.

Until next time… x

7 types of men to avoid

7 deadly sins of make up addiction