Let me set the scene: A few weeks ago my friend and I woke up one Sunday morning. I was hungover and we decided to go to town for a roast. I was in the middle of a crappy break up and I said to her “I really feel like getting away for a few days, like to London or Barcelona. I just want to get away from everything.” We were strolling through Liverpool One that afternoon when one of your representatives stopped Lizzy and encouraged her to enter ‘The Face of Blue Inc’ competition – all she had to do was get people to vote for her and the prize was a trip to Barcelona. Wow, ‘what a coincidence’ we thought, it was fate, she had to enter.

I have a social media following of around 200k and Lizzy and I have both got friends with in excess of 20k twitter followers each who have been promoting her profile. Not to mention her family and friends. All in all she’s been exposed to over half a million people so she’s been getting her votes fair and square. The people of Liverpool like to get behind one of their own. I mean take Chris Maloney, he was shite and still managed to make it to 3rd place in the X Factor! This is beside the fact that Lizzy is actually drop dead gorgeous and thoroughly deserves to win first place.

There was one girl ‘Tammy’ who entered the competition and suddenly within one day she managed to come out of nowhere and overtake Lizzy. She had more votes than she even had followers at one point and was boasting all over twitter than it was letting her vote multiple times. You investigated and found her to be cheating and her votes were reset down to 139 instead of over 1100. Obviously there is a way to cheat.

A similar thing has now happened with a male contestant ‘Chantiman’. His votes were climbing at an UNBELIEVEABLY fast rate and he has only a couple of hundred followers. Lizzy, along with several other people emailed you with proof that he has created fake Facebook accounts to vote for him and that he was likely buying votes, but after over a week of you saying you would ‘investigate’ him, nothing happened. Not only this but his ‘fans’ (who are most certainly him creating fake accounts judging by the way they all speak in the same broken English) have been slandering Lizzy all over her profile and going after her on twitter. This ‘Chantiman’ posed as several different people including ‘Jonathan Big Brother’ (who implied he was working for Blue inc and left her sinister messages saying he was watching her carefully) and Chantelle Hogg (who was using an American porn stars picture and claiming it was really her). These people implied all over Lizzy’s competition profile page that she was cheating, buying followers, photoshopping her photo etc etc to win. When we pointed out that other pages had received similar abuse but Chantiman’s page hadn’t, all of a sudden some fake accounts popped up and started slagging Chantiman off. This ‘Chantelle’ then tried to blame Lizzy for these accounts. Then the race card was brought into play, all of a sudden everyone was apparently being racist towards Chantiman. I condemn racism, sexism, homophobia and discrimination of minorities of any kind (apart from Wools) but there was no racism whatsoever.

Eventually Lizzy’s dad managed to contact the actual managing director (I believe) of Blue Inc who was furious that this had been allowed to occur. Within an hour of that phonecall Chantiman’s page had been removed. By this point he’d managed to buy over 2600 votes – seriously mate, just BUY a plane ticket to Barcelona.

On twitter Chantiman started tweeting about racism. The next day Lizzy received an email saying that she was being removed from the competition due to ‘dialogue escalating on a matter which is now damaging the competition for all concerned’. Since then Chantiman has been gloating under his own @iamchantiman account and some other fake ones he’s created such as @groupies4ever & @pmslcheater – all in the same broken English Chantiman favours. 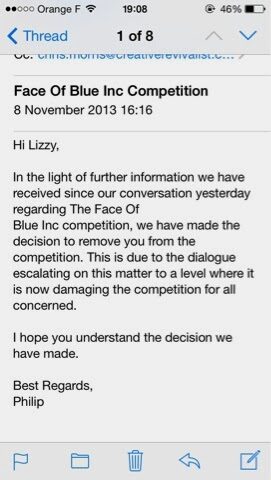 This has made an absolute farce of the whole competition. Not only have you allowed a 40 year old mentally unstable man harass and bully a 17 year old girl, you have also disqualified an innocent girl who was mature enough not to rise to the abuse. On top of taking her out of the competition to win the trip to Barcelona you actually e-mailed her the bad news while she’s away for the weekend in Paris with her mum, effectively ruining that holiday as well. We’re going to London next week, she has some puppies you could kick if you like? Or perhaps you’d like to set fire to her beloved leopard print collection? Ruin something else for her? 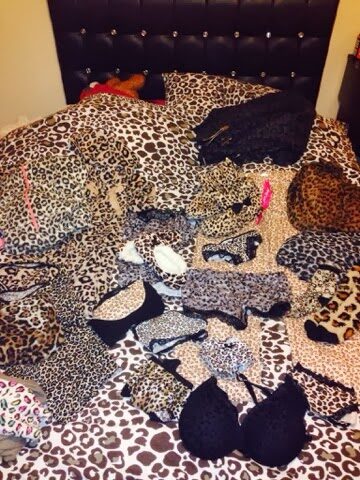 The competition is a joke and so is your company. Soz. Aba. Yous.