SBP: I’m no Gemma fan, I’m really not. She’s rude, dramatic, abrasive and quite often borders on the ridiculous. She brings a lot of criticism on herself just kind of by being herself. Tonight watching the I’m A Celeb opening though I cringed for her, and then I cringed a bit harder and just when I thought I couldn’t cringe anymore, I did. The comments about her tonight were way out of line as people struggled to out-do each other on how far they could take the fat jokes.

The memes below are just a small selection of the ones I saw. If you don’t like Gemma that’s fine, you don’t have to, she is Marmite in a dress after all but what went on tonight was purely about her size. It seems like because of her size people don’t even regard her as an actual human being. The insults were mostly men but let’s not turn this into a men vs women debate because plenty of women got in on the action too. Turn it in, it’s definitely not ok.

Zoe: I’m not one to show off but I’ve already gained all my Christmas weight and we’ve not even got to December yet. Maybe I’m on a bit of a ‘Justice for fellow fat birds’ crusade tonight but we need to talk about Gemma Collins.

There, I’ve said it. Let’s all move on. There is absolutely no need for it to be mentioned every single night for the duration of’ I’m a Celeb.’

The past couple of weeks have seen Twitter clicktivism manage to get the sexist Dapper Laughs off our TV screens and prove that we’re over our comedy coming with a side of misogyny. However, tonight it’s a case of one step forward, two steps back as my timeline is filled with critical observations of a woman over a size 10 that dares to be on TV.

Some have even felt the need to @ her and tell her she’s a ‘proper fat cow’.  Come on guys, if you’re going to be a cunt then at least be a funny cunt.

I’ve got no particularly strong views on Gemma either way as I’ve not watched TOWIE for years, but last week I read an interview she did with Heat magazine and my normally stone cold heart went out to her. Fair enough, she’s a bit of a tit, but she should be able to leave the house with her mother without the worry that a future Jeremy Kyle guest will yell mundane abuse at her about her weight.

She caused a bit of a stir last year when she had a sign saying “If you’re thin, you’re not coming in” outside her clothes shop for plus sized women. Yes, skinny shaming is just as bad as fat shaming but let’s all be honest – it was just another good chance to laugh at a ‘bubbly girl’ and mask it as ‘exposing Gemma Collins’ disgusting discrimination against thin women’. 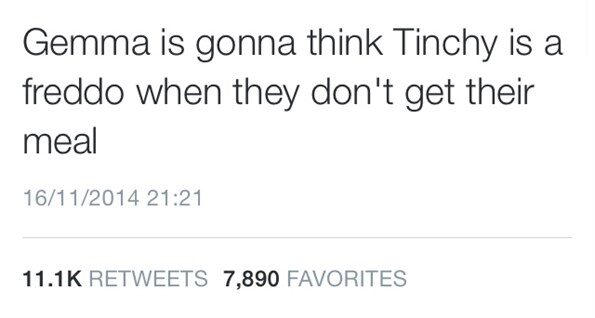 Over 11k retweets on a sizist and racist tweet. Nice.

If I have to see boring tweets like “I wouldn’t like to share rations with Gemma” or “She’ll be the first campmate in history to ask for seconds in a bush tucker trial” over the next couple of weeks then I’m going to wear out my mute button. I haven’t checked yet but I assume that The Lad Bible have already stolen everyone’s degrading tweets towards her and got a nice collection together, yeah?

It’s coming up Christmas so lets all have a heart and remember that although her showering isn’t going to be aesthetically pleasing as when absolute babes like Mylenne Klass go in the jungle, maybe we can all try not to send her a constant barrage of vile abuse?

After all; sarcasm isn’t the lowest form of wit; joking about Gemma’s weight is.

I wonder how people would feel if this meme actually came to pass. Arsed or no?