Obviously as soon as you get with a man, the first instinct you have is to change him beyond all recognition.  Scouse Man Probs is a smoker…no lad, them dirty ciggies gots to go, Scouse Bird don’t be about neckin no ashtray.

The sign of a clever woman is whether or not she can change a man while making him think he actually has a choice in the matter and sorry SMP, you’re playing against a pro here. I’m the Murray to your Henman.

After a brief conversation he (I) decided he was going to try hypnosis seeing as it was Stoptober. He doesn’t seem the type to deal with patches and plastic ciggies so a road less travelled was the way to go.

I spoke to Elliott from Revive Hypnosis and asked him a little bit about how many sessions would be needed etc. He explained it is possible to stop someone smoking in one session but in reality he’d recommend around 4 just to make sure it’s properly ingrained.  My concern was that not everyone can be hypnotised but Elliott explained that everyone can, it just means thetechnique he uses from person to person differs. SMP’s concern was that he’d be dancing round the room thinking he was a chicken and ending up a YouTube sensation. I told him “Don’t be so stupid, gobshite.” then as an afterthought, “Buy me some shoes or I’ll arrange for it to happen.”

Elliott asked if there was anything he could help me with and I was all like “Bitch please I’m like Mary Poppins; practically perfect in every way.” For anyone who’s interested he does hypnosis for all sorts of things like weight loss, anxiety, anger management, self-esteem, stress and phobias. 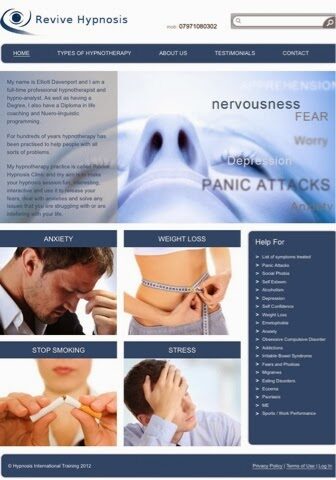 I asked SMP what it was like and he said it was completely relaxing and he was fully aware of everything Elliott was saying and fully in control of all his faculties throughout the entire session.

SMP went along for his first session on Friday, it’s now Monday and since seeing Elliott he’s smoked one cigarette when he was out on Friday night and that’s it. He hasn’t bought any, he hasn’t taken them with him when he’s left the house, and he just hasn’t felt like one at all. He said he’s got so much more confidence that he’s got the ability to stop and he feels amazing. I was gobsmacked, I was genuinely thinking it would take a while, like maybe he’d cut down a bit but already he’s pretty much cut them out already. He said going to work this week will be the true test but he’s pretty sure he won’t be bothering with the bifters. We went out yesterday for a few drinks and we got a waft of someone smoking and I asked him whether it bothered him at all and he said “No, not in the slightest.” Miracles do happen. We sat down last night and worked out that this could potentially save him almost £4000 a year, that’s like 8 pairs of Jimmy Choos!

The other change I’ve seen in him is that previously he was a bitof a stress-head. He’d get wound up by things quite easily whereas I’m placid and easy-going about pretty much anything apart from the existence of kitten heels and short haircuts on girls. Now he’s like a completely different man, he’s the most happy-go-lucky person ever. He keeps doing this weird thing with his mouth, smiling I think they call it, rather than Scouse snarling at everyone. I feel like doing things to piss him off just to test him but I’m not evil enough. Old Scouse Bird even kicked me off Team Crank yesterday, I was FEWMIN.

I text Elliott saying “What have you done to SMP, he’s like a new man!” and he said, “That’s just what I do.”

I found out Elliott does past life regression actually and that issomething I’ve always been interested in. Obviously I was Queen Cleopatra, Queen Anne Boleyn and Rose from the Titanic in a previous life so I’m going to go and see him soon and give that a whirl. I’m dead excited.

I hope this has helped give even one person the courage to change something they don’t like about themselves. According to Elliott, all hypnosis is self-hypnosis, meaning we all have the power within us to do whatever we want, he just helps you tap into it.