Well she’s done it again. She’s ‘broken the internet’ with yet another nude shot. If Kim K posting nudes is so tiresome and ‘done’ then how is she still invoking such a reaction? Girl knows exactly what she’s doing, exactly what her brand is and more power to her.

You only have to google search ‘kim k nude’ to find that this is nothing new, why is everyone still crying about it??

Kim Kardashian tweeted a nude selfie today. If Kim wants us to see a part of her we’ve never seen,
she’s gonna have to swallow the camera.

Or Chloe Moretz insisting that Kim has some sort of responsibility to cover up her body (Kim’s response to which was sassy as fuck 💅): 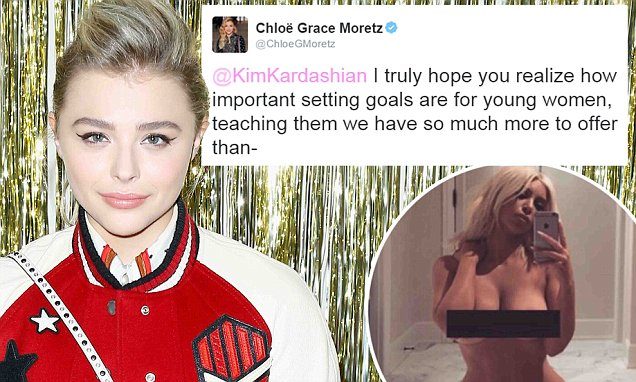 It’s ironic that all this in-fighting and these disagreements come on and around International Women’s Day – a day, in my eyes, when we should be celebrating all women, regardless of how they choose to make their cash.

If Chloe or Bette are under the impression that Kim hasn’t used her brains to get where she is and that every move, every selfie, every nude she posts isn’t a calculated move to get her to where she wants to be then they’re sadly mistaken.

As for setting an example to young women and children, you could argue that Kim has some sort of responsibility to be more implicit that she’s using her brains as well as her beauty to run her empire, but at the end of the day, she gained notoriety for that infamous sex tape (which there is absolutely nothing wrong with by the way) so why now is she expected to be some sort of children’s entertainer? She’s Kim, she’s true to her brand.

I’ve always said that whether you use your tits or your wits to get ahead in this world, it’s still girl power as long as you’re in control and rest assured, the Kardashian family are firmly in the driving seat of their own bandwagon. Agree with what they do or not, it’s not your life, it’s theirs and it’s their choice how to live it and your choice whether to like it or not but crying all over Facebook about it isn’t going to change their lifestyle. I doubt the haters’ opinions matter all that much to them. Don’t like it? Just ignore it.

Everyone has talents and it’s a far worse crime NOT to use them and to let them go to waste than to explore them to their full potential. Some people are BORN WITH amazing singing talents, some people are brilliants actors, some are great writers, some are funny and some are blessed with (and work slavishly to maintain) banging bodies and a shrewd business mind. All Kim’s doing is flaunting what she’s got. I doubt anyone would have a problem if Adele released a video of her shamelessly singing acapella. No, she’d be lorded.

So you still think Kim’s nudes are wrong and you don’t want your kids seeing them… well that’s up to you to police that. With all due respect, your kids aren’t Kim’s responsibiliy. Her kids are her responsibility and her getting her infamous arse out every now and again is giving her kids a life that most of us could only ever dream of.