Scouse Bird Problems – A note to all hen do's this summer

I’m not against women having one last night of freedom, in fact I’m all for it. But why does it always have to be in my hometown, and why does it have to be so fucking neon? And don’t get me started on the pissing tutus.

Even celebs can’t resist the tack

Have a spa break, get rotten in Ibiza, go for a weekend away – please, do anything other than come to Liverpool and wander around Mathew St in leggings with a shot-glass necklace around your neck. I’ll pay the difference in what it costs – that’s how much I don’t want to see hen dos ruining my night squealing along to Beyoncé’s Single Ladies.

Somewhere along the line, Liverpool has become a firm favourite with the clucking hens and I’m struggling to comprehend why. Blackpool is close by (but far enough away, thank God) and, lets face it, it’s safe as the nation’s capital of Tacky Hen Dos. So why has Liverpool become infected? I’ve got a couple of ideas. Over the past few years, Liverpool become quite En Vogue (Although actual Vogue can piss off calling them ‘Power Brows’ – they’re ‘Scouse Brows’) and we’re having a good run of it at the moment.

But nothing makes my skin crawl when I see a group of women hopping off the train with rollers in their hair, thinking they’re being ironic. It makes my blood boil when I see a hen party taking a picture of themselves for Facebook, about to caption it: ‘In Liverpool, having a boss time, laaaa’ (again, ironic, apparently). And the most annoying thing of all? Liverpool has some of the best nightlife in the country, yet most hens don’t experience this as they spend half of their time in the Yates’ near the train station.

Because most hens don’t even plan their weekend properly – they just assume they’ll get off the train at Liverpool Lime Street and you get an instant, boil-in-a-bag hen do. I just don’t understand it. Why would you go to a different town in the UK, a town you don’t know, to spend your final night as a single women asking cranks like myself: ‘Where’s good to go around here, chuck?’ (Please note, I will always send you to the exact opposite of ‘good’)? After spending half your evening wandering around trying to decide where to go, before you know it, it’s time to return to your grotty hotel and get your head down on some questionable sheets. Formula One guys… amirite??

And why do they always dress up like the Pink fucking Ladies? Actually, I can probably hazard a guess at this one. Clearly one of them went: ‘Hey girls, it appears we’re all devoid of personalities so should we do fancy dress, dance the night away to Flo Rida and drink Smirnoff Ices?’ Grease isn’t even a good film – yes, I went there. Although, it did teach us the all the important message that if you want the lad, slut it up in disco pants and smoke a ciggie. 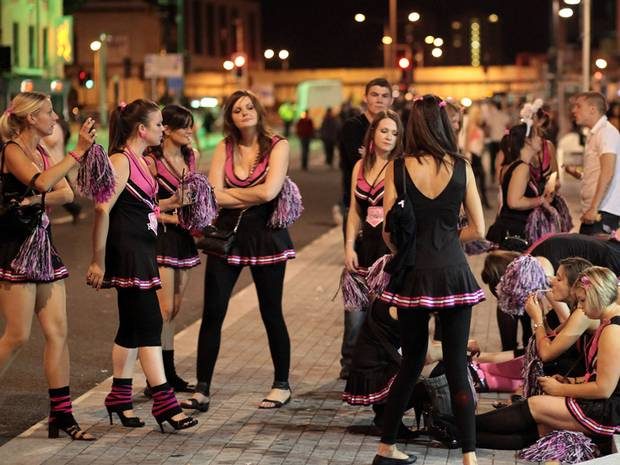 And if brides-to-be and their mates are in love with Liverpool, I get the feeling it’s an unrequited love. Sure, Concert Sq acts as a holding pen to keep them out of the rest of the city and Mathew St is accommodating. But then, with every other bar offering one pound drinks, Mathew St is accommodating to everyone. I’ve noticed a few hotels offering packages to appeal to hen and stag dos, but they seem to be hoping for a classier clientele – with an emphasis on spa weekends and pamper sessions. They’re hardly helping them blow up that inflatable penis…

I’m so thankful that one of my best friends has got engaged and shares my hatred of the willy straws kind of hen parties. She’ll be having a hen do that’s like her, classy (I actually cannot promise that – we’ll just be disgraces without the feather boas). I won’t have to prance round in a neon tutu, nor will I have to pretend to enjoy to see some oiled-up Chippendale gyrating away – this fact makes me love her even more.

Stay classy, hens. And if you can’t, have the decency to stay in Mathew St and Concert Square, well out of my eyeline.

For more of Zoe’s articles visit her blog