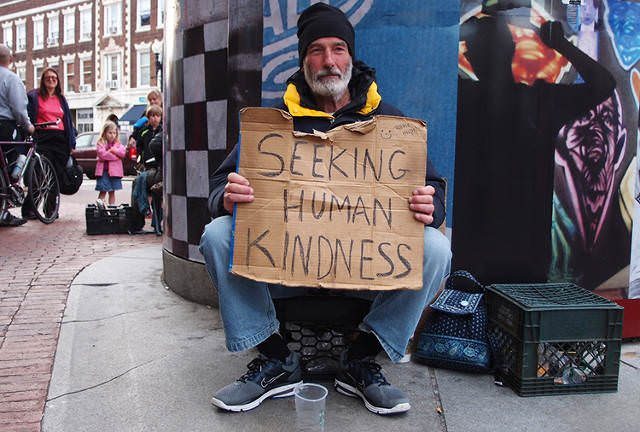 In this city (and country, and world) we have a homeless problem. Charity begins at home but that is all well and good unless you don’t actually have a home to begin with and you’re fully reliant on the charity of others. Society is desensitised to people sleeping rough and in winter especially, it breaks my heart.

In recent years, the spotlight has been shone on Liverpool’s rough sleepers (mostly thanks to the rise of social media) but in spite of all that, their numbers are swelling – you can hear about it from every local news outlet. You could argue it’s largely to do with the current political climate but this isn’t going to be a piece about that, it’s about what we can do in the right here and the right now.

There’s not a day goes by when I don’t see someone moaning on social media about people  ‘bragging’ about helping the homeless. It goes a little something like, “Omg can’t bare [sic] these people buying a coffee for the homeless and then posting it for the likes. Attention seeking arseholes. Just do it and shut up about it.”

And this is where I have a problem.

Why should they shut up about it? You’re not in their heads, you don’t know their motive. People are so used to shutting their eyes and ears to people begging on the streets that anyone or anything we can do to change that IS. A. GOOD. THING. Regardless of how many likes someone gets and how much you resent it. It can be infectiously inspiring and that’s powerful.

For example, a couple of years ago I was in a really crappy place in my life and it was the middle of November, it was freezing. I walked past a homeless man by the bombed out church and did something I’d never done before – I went to Sainsbury’s and bought him a meal deal and he was made up. I was going through a bad break up and the sense of happiness and joy it gave me made me cry. Giving felt good, even though it was only a tiny gesture. It helped him but it helped me more. I wanted to tell everyone about it. Not for likes, just because doing a nice thing for someone feels nice and everyone should do it more!

So I did post about it on my social media. Then I got hundreds (and I mean hundreds) of messages from people all over the country in the following weeks saying that I’d inspired them to something similar. In the middle of winter, people who were previously invisible to passers by were now being inundated with warm meals and hot coffee – it’s not solving any problems long term, but it must be a nice thing to feel cared about when you’re used to feeling ignored.

I do the same ever now and again when I can but I daren’t post about it because of the negative attention it would get and isn’t that sad? How can doing something good get such negativity? It makes no sense. Literally today I bought a guy some stuff from Gregg’s and I saw a couple of lads and an older woman smile at what I’d done – I don’t know if they went and did the same for another of Liverpool’s homeless, but I hope upon hope that they did.

The other insult that gets bandied about is that people are ‘exploiting’ the homeless to get likes on social media. Well I think that unless you’re taking selfies with them or forcing them to hold up their coffee with a smile and a thumbs up then I really don’t see the harm in saying you bought someone a coffee and encouraging others to do the same. I also don’t have a particular problem with someone posting a picture of a homeless person (with their express and un-coerced permission of course) and telling their story – not every homeless person is a dangerous alcoholic drug addict and putting a story to a face highlights the human element of this horrible problem and galvanises people into action. That’s not a bad thing!

Exposure of the problem

I’m sure you’ve all heard of high profile celebrities making hush hush charitable donations but it somehow gets leaked to the news – mate, how do you think that’s getting leaked to the news? Their agents. It’s a cynical PR move but hey, if it raises the profile of said charity and gets more people involved with it then no harm, no foul.

In summary, while it’s all very noble to make charitable contributions (of any kind) on the quiet, shouting about them could actually do so much more good. So ignore the Moaning Martins, the Negative Natalies and the Dickhead Daves and if you do something boss that’s helps others then you tell the whole fucking world hun, because if it inspires just one other person to do it too then that, my friend, is amazing.

The Whitechapel Centre is Liverpool’s leading homeless charity and they do amazing work helping, feeding and sheltering the homeless of Liverpool. For more info on how you can donate money or supplies please visit their website. They run various fundraising events throughout the year too!