Scouse Bird Problems – Why Gin Is The Devil's Juice

I hate Gin, its smell alone makes me do a little mini vom in my mouth. Unfortunately the vile drink seems to be having a bit of a renaissance with Gin bars, Gin gardens, pop up Gin shops etc appearing all over Liverpool at the minute.

Here are 6 reasons why gin was sent by Lucifer himself

1. It tastes like a mixture of soap and flowers. I may not have a refined pallet, but seriously who wants to drink your nans bathwater?? No one.

2. It makes you more drunk than a massive drunk thing. Apparently there is no scientific evidence that Gin is more potent than say Vodka, but I don’t think it’s any coincidence that it has this reputation. The comedian Dylan Moran warns that ‘The most dangerous drink is Gin – you have to be really careful with that. And you also have to be 45 and sitting on the stairs because Gin isn’t really a drink, it’s more of a mascara thinner’. This is obviously true.

3. It makes you totally emotional. On one girls night in I was persuaded (ok, there was nothing else in) to drink Gin. I got drunk and began to weep about the treatment of elephants and how people didn’t understand what amazing creatures they are. I sent an emotional e-mail off to a charity in Thailand pledging my voluntary services to help the orphaned elephants. Once I had stopped crying and sobered up I had to e-mail them back saying I had been offered a job and could no longer help. This was a lie and I am going to hell, all because of Gin.

4. In olden days Gin was what all the ‘wrong un’s’ drink, and this led to a total meltdown in society.  Apparently everyone was at the Gin, it was responsible for neglect in families, crime increases and general debauchery on a huge scale. The Government even had to start a campaign to stop people from drinking it.

You might have seen the famous picture from this campaign, it’s called Gin Lane and shows a street full of people rotten drunk, the lady at the front is half naked, has Syphilis scars and is dropping her baby in the road. Say what you want about Vodka but it’s never made me get my baps out or drop my baby in the middle of Queens Drive. (…. Yet!) 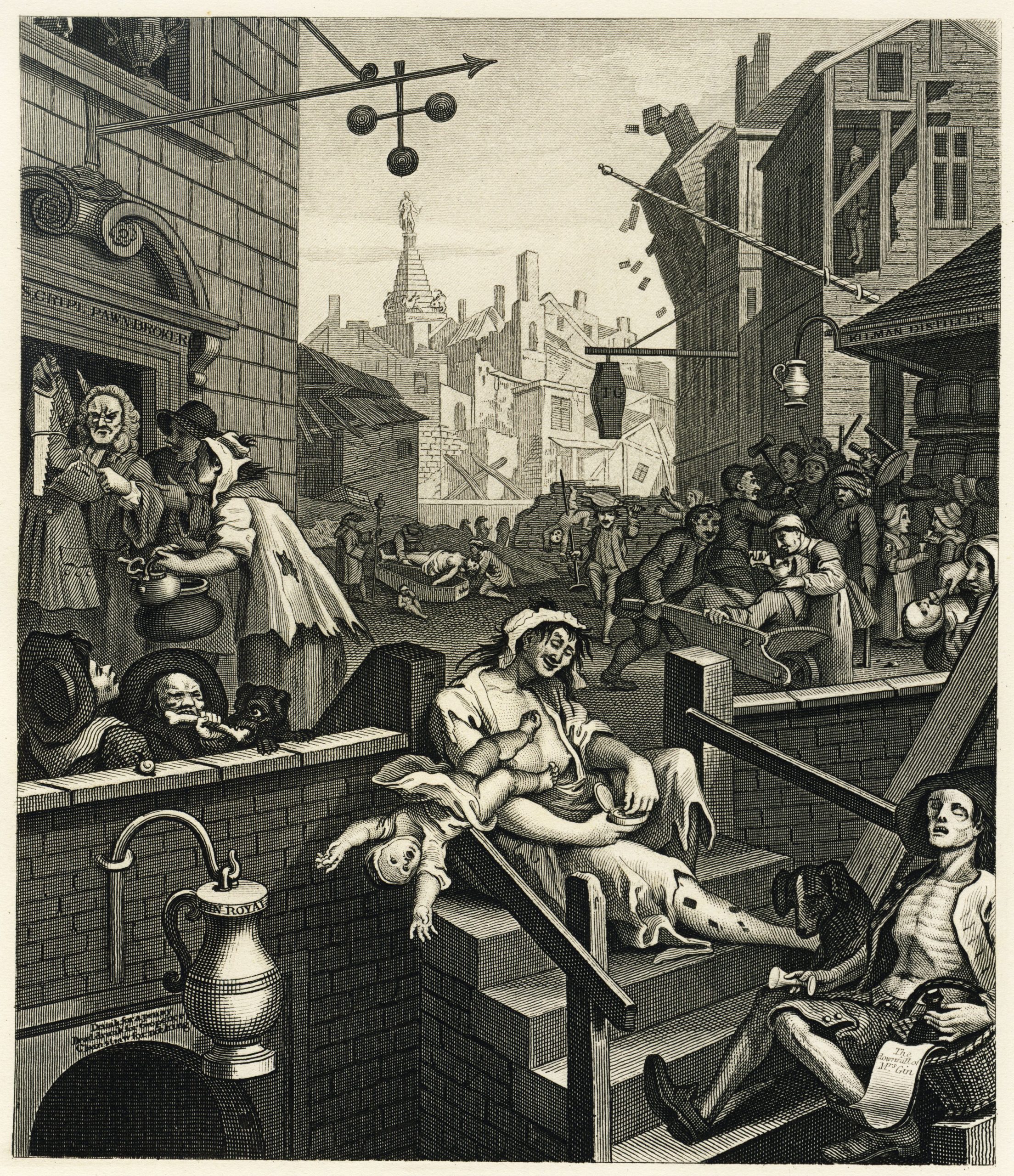 5. Its known as ‘Mothers Ruin’. Not just because it makes you drop your child in the street, but also because it is made with Juniper Berries, these are rich in Terpenes which cause the muscle of the womb to contract, apparently causing fertility problems if drunk to excess. Scary, but also possibly based on dubious scientific facts.

6. It gives you the worst hangover ever. As if the pounding in your head wasn’t enough, having to breathe Christmas tree flavoured breath into your own face the morning after only adds to the nausea and prolongs the pain.

Snoop might sing about the joys of Gin and Juice (with my mind on my money and money on my mind) but he also calls women Hoes proving that there is nothing good about the flowery drink. Unfortunately it will take more than a few posh bars and some floaty bits of watermelon to persuade me otherwise. Stick with vodka it keeps you ‘relatively’ normal. It also doesn’t ruin any mothers and it pretty much only tastes of the mixer – not Satan’s shower gel.

Are you a gin company or a gin bar owner who think you can challenge this point of view? Get in touch…