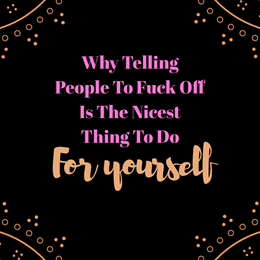 Are you too nice? Can there be such a thing as ‘too nice’?  There can, and another word for it is “daft”.  You see, as someone who is regularly told they’re too nice, I’ve noticed a bit of a pattern emerge:  I’m always told it right after I’ve been mugged off by someone and it is clear that whichever mate’s said it was actually being nice herself, biting her tongue so not to call me an idiot.  Even if being too nice was a compliment, it’s not one I would be right to accept because, in all honesty, whatever favour or extra mile it is that I’ve done for someone normally hasn’t come out the goodness of my heart – in most cases I’ve done it because I’ve been too scared to say ‘no’ aka ‘fuck off’ or stick up for myself and on the inside I’ve been boiling with resentment, knowing full well that I’ve been taken advantage of – hardly nice.

If you find yourself nodding and saying “me too” to your screen right now, have a read of the following round-up of the most common incidences of when we let this fear of upsetting people get the better of us. These are things we shouldn’t try to justify to ourselves as ‘just being nice’, but – for our own good – knock on the head immediately.

We’ve all been there – the manic first day of the sales when it’s every woman for herself and shopping is no longer a leisurely meander around the season’s gorgeous new lines in cool, air conditioned boutiques, rather it’s sweating profusely, regretting wearing such a heavy coat for what is essentially something akin to an entire afternoon of HIT, and sporting 65 carriers, every one of them with “SALE” blazoned across the front, just in case anyone was in any doubt that everything you wear for the next six months will have cost less than twenty quid.  Nevertheless, this particular Saturday, the afternoon is going well – in your sweaty delusion, you feel like an absolute winner because you’ve found a gypsy skirt (only one size too big) for a fiver, you’ve braved the monster queue for the tills and you’re next in line.  Then though, what’s this? Some girl shamelessly ignores the “one queue, two tills” set-up that you’ve been patiently adhering to for the last twenty minutes and goes straight to stand behind another girl who’s just a chip and pin away from finishing her transaction! You feel your face go red(der) and rage inside – can this girl be so stupid that she’s not seen the 60-strong queue of people out the door? Does she think that all 60 of us have got something against the girl on till number two and that we’re all waiting for the same girl on till number one?  You know the answers to these questions – the sly cow saw the queue, thought ‘be arsed with that’ and counted on your politeness (read ‘stupidity’) to hold you back from saying anything. And she’s right, because five minutes later as she sashays away with her bags and the assistant that’s just served her chooses that moment to close his till and go on his break,  all you can do is stare helplessly at the woman STILL in front of you on till number one – who is not only taking stuff back but is now signing up for a loyalty card – and think “it should have been me”.

They say you learn who your true friends are when you fall on bad times but we all have that one friend who shows her true colours when things go right for you. New man? She’ll tell you she thinks she knows his ex (who is “dead sound actually”). Lose a couple of stone? She’ll ask you what you’re going to do about all the loose skin. Get a promotion? She’ll tell you that you’re lucky that your boss fancies you.  It’s toxic little comments that leave you doubting yourself, wondering if you’re being paranoid or if she really did come to lunch with the sole intention of pissing on your parade. What’s ironic is that if anyone else had made those comments to you, you’d be ripping into them with that very same mate who’s hating on you right now. But do you pull her up on it? Or even do the same (an eye for an eye and all)? No, because she’s your “mate” and you’re (way, way) too nice.

You’ve not seen your girls for weeks, you’ve eaten light (ok, light-ish) all afternoon to be able to enjoy a fancy meal with them later on and you’ve drawn on impossible levels of willpower to keep from telling them the new gossip on the phone so you can tell them properly tonight, with prosecco in your hand and steak on your plate. Now at the restaurant, you place your order, go over who’s wearing what, get all the small talk out the way and then things start to get good – the food begins to arrive.  The mate on the left of you gets hers, as does the mate on the right. You feel your mouth watering, unable to concentrate on Stacey’s story about her cheating fella because of your steak’s imminent arrival. The waiter comes and brings three more plates for your mates on the other side of the table. Fair enough, he can only carry three plates at a time and your steak’s probably so big that it needs to be carried separately.  Chipping in to insult Stacey’s bloke when appropriate, you crane your neck to see if there’s another waiter coming.  There isn’t. Ok, so just one waiter attending your table, normal, keep breathing.  Classy group of bitches that you are, your mates refrain from eating to wait until you’ve got your dinner and earnestly carry on the conversation, urging Stacey to sign up to Tinder and get a life.  Now though, ten minutes later, all of you have weighed in with your opinion on Stacey’s sad love life and there’s really nothing more to say (after all, how many times and ways can you tell her to leave the tw*t?).  A silence falls between your group – it’s the first time in years (or ever) that this has happened and there is only one explanation: the elephant in the room, the unspoken, what everyone has been dying to say all through Stacey’s tragic monologue: where’s your steak?  On asking the waiter the same, his face tells a story which confirms your worst fears: he’s forgotten it. First he looks confused (“what steak is she talking about?”), then scared (“shit, thatsteak”), then he feebly attempts a smile as he lies through his teeth, telling you it’ll “just be a minute” before sprinting back to the kitchen. You urge your mates to start without you and, a good 20 minutes later, your steak eventually arrives. By now though, your mates are already finished, undoing their top buttons and discussing which bar to move on to.  You rush your dinner, feeling completely self-conscious being the only one eating – imagine if someone you know walks in and sees you now, your five mates each with a little espresso and you going through a gigantic steak like there’s no tomorrow. The bill arrives.  Not only do you pay full whack, but – with your autopilot’s nice (daft) mode kicking in – you leave a sizeable tip too.  I mean, really.  The guy had one job. I’ve been a waitress and I know mistakes happen but did I think the customers were unreasonable if they asked for a reduction in the bill when I messed something up? No! Did I think they were tight if they didn’t leave me a good tip when I forgot half their order? No! This all said, do I ask for a reduction in the bill or leave a lesser tip when someone messes up my order and my evening?  No.  In fact I’ve been known to leave a bigger tip, just to show the waiter there were no hard feelings (even though there most definitely were hard feelings)… Nice? Not really. Daft? Definitely.

Your boss is up for promotion and that can only mean one thing – he’s going to make you work twice as hard to make sure he gets it.  That report he was completely cool about last week? He now wants it finishing by six tonight, something which would be fine if it wasn’t for the fact you’d already arranged to finish early today – it’s your man’s birthday and you’ve got to a cake to bake, a present to wrap and a bikini line to wax.  You’ve worked well, more than well, all year and you both know he’d be wrong to see his arse just because you can’t meet his last minute deadline today but what happens? Your bloke ends up with a Tesco caterpillar cake, the present goes in the Tesco carrier and you take a Bic to your bikini line, regretting it before you’ve even started. Why? Because you’re nice and simply incapable of saying ‘no’.

Reading these examples, I’m sure you’ll agree just how ridiculous we’re all being by trying to people-please. It’s time to stop being scared of confrontation, take a deep breath and… say what you think – even if it’s not nice or what the other person wants to hear.  In all the cases above, no one’s been worried about you (quite the opposite!) and so why worry about them? You’ll have a stressy couple of minutes when you do say something but that absolutely beats feeling wound up for possibly weeks (or months!) if you don’t say something. So bite the bullet, stop pretending you’re nice when you’re really just being a wimp, go forth and SPEAK UP!

Hello Fresh Subscription – use code FRESHSTEPH to save