When you’re after a weekend getaway, it’s always tempting to ‘stick with what you know’. Choosing a new place to stay or camp can be a bit of a minefield; there’s so many things to consider so you just end up going to the same place and seeing the same sights. Yawn. Here’s my tried and tested campsite & glamping pod list for England, Wales, Scotland & Northern Ireland with all the info you actually need to know.

PROS? Everything – this is very much a ‘posh’ site. Everything is very well kept, the toilets are cleaned twice a day and there are plenty of them. In the toilet block they even have lockable cubicles with sinks in them and great lighting for makeup so you don’t even have to be a camping scruff. It’s well placed, has ready camp tents and glamping pods available and the staff are wonderfully helpful. Electric hook ups available. There’s a pub on site too – open until 11.

CONS? There aren’t any really, it was fab. If I had to be picky I’d say that the paths could be better lit after dark because certain drunk people 🙋 might go crashing into trees on the way to the toilet…

GOOD FOR? Families, couples and those who want a good base for exploring the lakes. Great for glampers who don’t like roughing it too much.

WIFI? Yes and it’s pretty good. There is an extra charge though. Different members of our party had different luck with 3G/4G singal so I think that’s network dependant.

CLOSEST TOWN(S)? Bowness. it’s a busy town right on lake Windermere. On your way up the hill from the boat dock you’ll come to an ice cream shop with a blue fascia, you HAVE to try the chilli chocolate ice cream, it’s unbelievable. There’s a shop there called ‘Bath House’ which sells prosecoo bubble bath too. Avoid The Flying Pig pub – it’s not brilliant, think it relies on passing custom rather than a great customer experience.

PROS? It’s open all year round so if you’re a bit of a camping addict, your season doesn’t have to stop when the cold weather sets in. They offer caravan pitches, tent pitches, electric hook ups AND fully heated glamping pods. We visited in January and at times we had to turn the heating off because it was absolutely roasting! The shower and toilet blocks are huge and really clean which is a massive plus – there’s nothing worse than having to go for a wee and being scared to touch anything, or queueing for ages just to get a wash. It’s a brilliant base for exploring the surrounding areas and they have a woodland adventure centre (archery etc) right next door as well as being smack bang in the forest of Dean.

CONS? The site is really tidy and well kept and with that comes rules. There are no camp fires allowed at all (but you can use a barbeque under certain conditions) and for us this kind of took away something from the whole camping experience – what’s a camp without a campfire? It was especially frustrating in January as it meant sitting outside was a no no and so for us, once the baby was asleep we had to just sit inside the pod in silence. Also the barriers close at 10pm meaning if you fancy a late one in the local pub, you may well be shut out til morning…

GOOD FOR? Families, couples and those who want a good base for exploring a really interesting part of England. Great for glampers who don’t like roughing it too much.

WIFI? No wifi but you can get occasional signal in certain areas.

CLOSEST TOWN(S)? Loads! Coleford is technically the nearest but Gloucester, Tewkesbury, Cheltenham, Bristol, Chepstow, Ludlow, Hereford & Leominster are all within driving distance. If you’re a War of The Roses fan or have at least read the Phillippa Gregory Cousins War series then this is the perfect base to explore. The famous Yorkist victory of the Battle of Tewkesbury was fought close to Tewkesbury Abbey; you can visit the Bloody Meadow AND see where George Duke of Clarence is buried etc. The castles of Chepstow, Ludlow, Bristol and Hampton Court (castle, not palace) are all nearby.

PROS? Llyn Gwynant is located within a valley on the edge of lake with amazing views all around. It’s not hard to find at all. On site there is a toilet block with a full set of showers. They have a stone baked oven which cooks pizza for tea, and a breakfast bar for bacon and sausage butties in the morning, or even tubs of fresh strawberries. They have portable firepits dotted all over the site that you can easily move over to your camp so you can have the warmth of a campfire without damaging the grass.

CONS? No matter what network you’re on they have zero signal, even in the closest town, and no wi-fi. If you’re in a big group looking for a weekend piss up, then you have to be quiet by 11 or face being kicked off. No music at all is allowed at any time. no fishing in the lake.

GOOD FOR? The site is not too far from Snowdon, so is ideal for walkers. They have canoe hire so you can venture out onto the lake and find the hidden jumping spots only accessible by water. 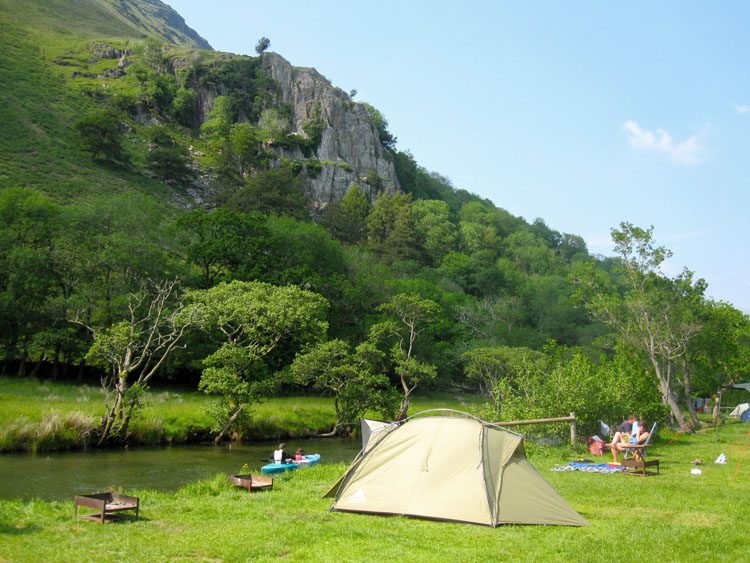 PROS? Signal! You can actually get full 3g signal! The town of Bala is literally 2 minutes down the road and although we forgot quite a few items (that’s what you get for packing in a rush), we were able to pick up everything we needed in the town. They’ve got chippies, pubs, a Spar, a Co-op, a Subway and various camping shops. Forza Bala! The campsite itself is split into two sides; the main side is closer to the shower block and has lecky hookups so it’s more ‘glamping’ and the river side (over the road) is more back to basics. There’s a rope swing over the river, which can be quite fun in the summer – if you like you can even get a wash in the river in the morning but hold on to your shower gel, the current will carry it off! Also it has boss phone signal… did I mention that?? 🙌

CONS? If you’re staying river side it’s a massive hike to the showers, you’d have to take the car. Quite often locals will hold illegal raves in the nearby fields which start at about 2am and go on until 9am on the dot so take some earplugs or prepare for Wigan Pier style bass thumping if you’re unlucky enough to visit on a rave weekend.

GOOD FOR? Families, glampers who like all their home comforts, people who can’t bear to be parted from their phone (me) and also the experienced back to basics campers. It’s a good all rounder.

SHOP? No but Bala is really close. Sell firewood on site. 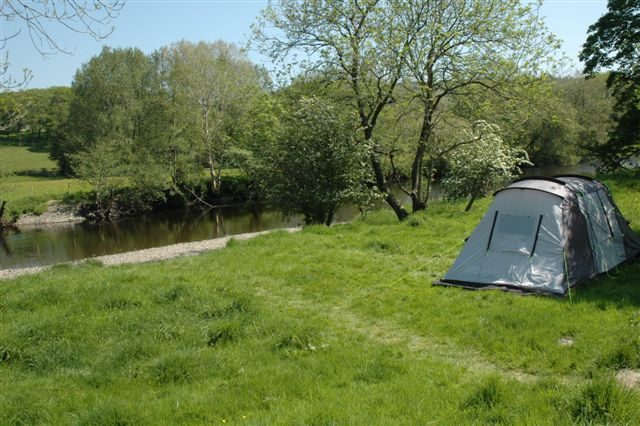 PROS? The owners Lesley and Stuart are absolutely amazing and their 3 dogs Misty, Maggie and Taz are so friendly that you feel like part of the family within minutes of arriving. Our Wigwam was en suite which meant no walks to the toilet block (good for when you’re campfire drinking and break the golden seal) but the toilet block is about 5 steps away from the wigwams anyway so it wouldn’t have been a problem staying in another one. The wigwams are kitted out with kettles, plugs (for chargers and straighteners), heater, table and chairs, comfy beds and the nicest touch of all; fairy lights. It’s just half an hour outside of Edinburgh (by car or train).

CONS? It’s on a working farm so if you’re into the whole animal thing, there’s horses and pigs to pet, if not then that might be a con but honestly, you don’t have to be anywhere near them. I genuinely can’t think of a con, this place was amazing.