Scouse Bird Problems – How to: Get a Guy To like You In The 21st Century

A recent article posted by Glamour US about the things a woman can do to ‘make a man fall hard for you’ has caused quite a bit of outrage on social media for its outdated and sexist tips; forcing Glamour to take it down.

Apparently, the key to winning a man’s heart in this day and age actually has nothing to do with being boss, having a fab personality, an opinion of your own, and a little bit of self-respect. It’s only 2015 after-all; the idea of women being funny, independent, interesting, verbal, dominant and in control is a bit too progressive for the times we live in. Why would any man want those qualities in a woman when they could have one who is a boring, silent, subservient, sex-cook robot in negligee instead?  According to Glamour US, making a man fall for you is much more simple than being yourself. All you have to do is stock up the fridge with his favourite drinks, let him solve your work problems ‘because men do like to fix things’, and be open to whatever he wants to try out in and outside the bedroom. So your boyfriend’s into Plushophilia!? (Sexual attraction to teddy bears). No problem; you want him to think you’re opened minded, don’t you? Well then let him have a go on your favourite childhood Beanie Baby for fucks sake, who ever heard of sex for mutual pleasure anyway?

Making him snacks after sex was also added to the list of how to be a 1950s housewife, although anyone worried about their cooking skills can be rest assured that this doesn’t have to be a gourmet meal; milk and cookies will do because you are apparently dating a sexist who is also a five year old. 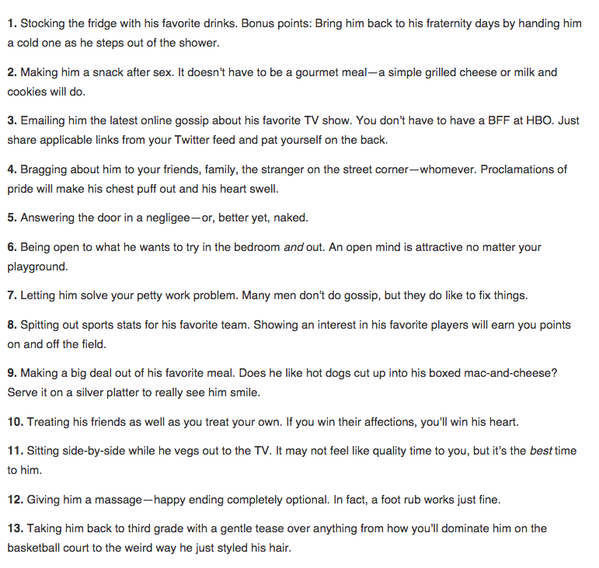 It does seem odd that a popular woman’s magazine would publish such an idiotic article, especially at a time when feminism is having a bit of a moment. But after doing my own bit of research, I found that many women’s magazines were giving similarly ridiculous advice about how to get a guy, where the implicit message seemed to be about fulfilling a subservient fantasy for men.

For example, Allwomenstalk advised in a bullshit article on the 20 flirting tips to get a guy to like you that

“When he’s talking, listen to him (and I mean really listen!) and respond…. For example, if he’s talking about pool and you don’t have the slightest clue about the game, let him talk about it and then say something like “Wow! All that makes me wish I knew how to play pool. Maybe you could teach me sometime,” and give him your best smile. If he smiles back…Ka-ching!”

I don’t know what’s worse. The absolutely sickening and unacceptable use of the word ka-ching, the patronising advice to dazzle a guy with not just any old smile but your best smile, as if women practice grinning in the mirror until they master one fit for a cover girl, or the encouragement to feign an interest in his hobbies as if we ladies did not win the vote almost one hundred years ago and have no voice or opinion of our own.

You will not remain an unmarried spinster for the rest of your life if you happen to smile at a guy you quite fancy with an unfortunate lump of spinach stuck in your teeth. It is an embarrassing scenario but it happens to the best of us. Nor will you die alone if you dare turn round and say to a guy who has wasted the last twenty minutes of your time banging on about a pool game you did not see, that you’ve never cared to watch it because quite frankly, it is boring as fuck, and you’ve never cared to play it because you’re too busy getting pissed on a night in the pub to do much else.

Yes, lingerie is sexy. But actually, thoughts and opinions can be too.  Most men will probably actually appreciate that you have interests and hobbies of your own, so they can go out with their mates safe in the knowledge that you’re not waiting at home for them with a gun in your hand and daggers in your eyes because you have no life of your own and want to spend every breathing minute waiting on him hand and foot.

Maybe the girl who wrote the glamour article went to an all girls Catholic school, has no brothers, male relatives, male mates, boyfriend of her own, and watches a lot of Mad Men. Maybe she was just trying to write a funny parody but the poor sod failed miserably, and now has to answer to the wrath of Twitter’s raging feminists. Whatever the case may be, contrary to what the article implied, most men do not want a boring, opinion-less, 1950s meets basic bitch for a girlfriend, no matter how good she is at the ironing. 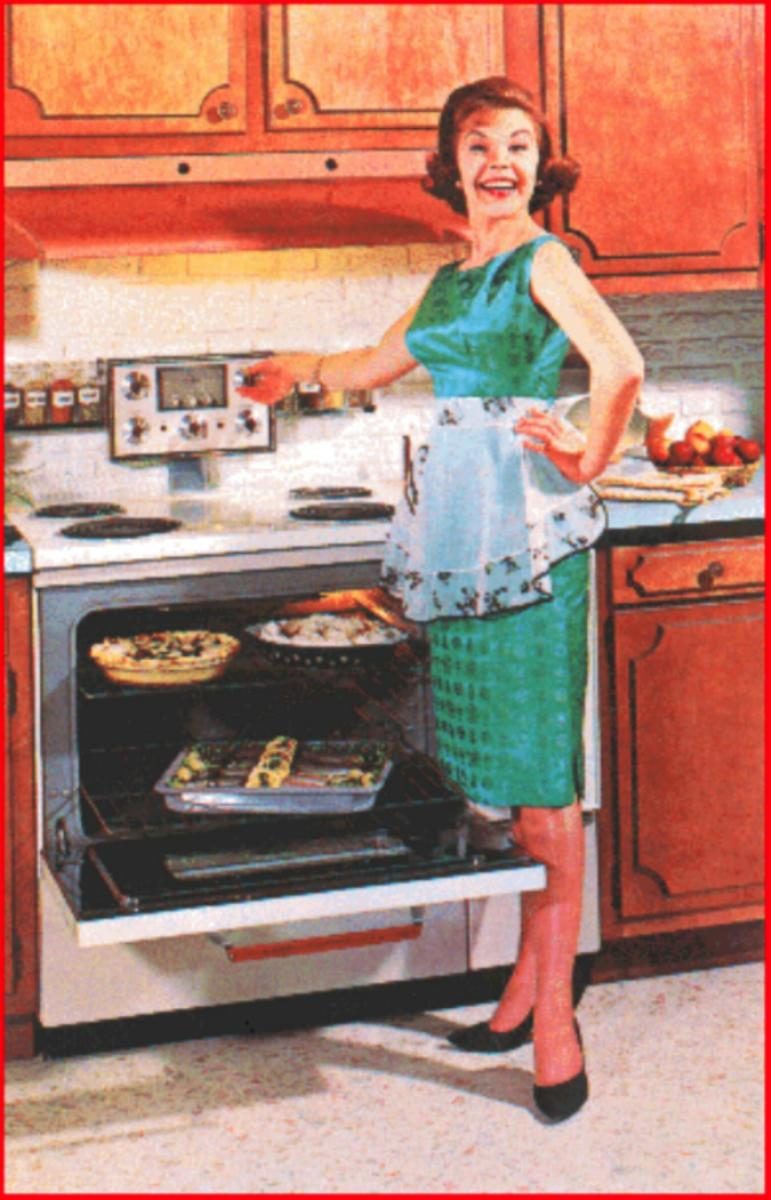 There is nothing wrong with wanting to do something nice and thoughtful for your fella, but we should be past prescribing acts of kindness to gender roles. If you want to buy a few beers for your boyfriend go ahead and do so; but do it because he’s had a rough day, because you want to cheer him up, because you fancy a few yourself, and because he is the sort of guy who’d do the same for you. After all, I’m sure he learnt early on in the relationship that prosecco, chocolate and making you snacks after sex are also a way into your heart, instead of being a sexist, misogynistic pig.  Don’t do it because you are a woman and feel that the only way to please a man is by feeding him his favourite drinks and snacks as though he’s some sort of child because, as so many enraged Twitter fans have pointed out, we’re not in the 1950’s anymore.

It might not have worked yet, but relax, you’ve still got plenty of time and don’t need to transform into a speechless idiot who smiles and nods and laughs at everything some gobshite says to win over his affection. I’d rather be alone – or better still, with one of the thousands of lads whose views are in line with this century’s, and who are probably just as offended by the Glamour article as women.